Welcome to GW, Thomas LeBlanc, the University’s 17th president. While we, The Hatchet’s editorial board, know you are by no means new to the higher education world, we thought we’d give you a quick introduction to GW and what you should expect from students.

We assume you already know that GW is a very politically active university – the most politically active in the country, in fact. And with this title doesn’t just come a passion for national politics: Students have an active role in University politics, too. Unfortunately, some of the interactions when students take activist positions aren’t positive. You should be ready for pushback when students feel that administrators are not being transparent or are not putting students first. Recently, a group of resident advisers petitioned the National Labor Relations Board in the hopes of unionizing to demand better treatment as University employees. And when some students felt University President Steven Knapp’s Earth Day speech on sustainability was ironic given the University’s refusal to divest from fossil fuels, they protested during the speech. 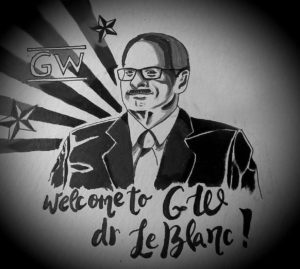 Some of our most political students are wary when it comes to trusting administrators, but we’re hopeful that you can change that. Students want to know what’s going on within the University and why decisions are made. Being transparent would be the best way to show you’re turning over a new leaf at a university that has had its fair share of transparency issues in the past. GW is still recovering from the admissions scandal that led to GW falling out of U.S. News & World Report’s top 50 universities list – a coveted position we still haven’t crawled back to. And with consistent budget cuts and faculty layoffs, students and faculty have called for more transparency with the University’s financial plans. Even our sports teams haven’t been without conflict. Just last summer, former head men’s basketball coach Mike Lonergan was accused of verbal and emotional abuse. Following a Title IX review, Lonergan was fired with many questions about the review unanswered.

Unfortunately, this lack of transparency even came with choosing you. Faculty members in the Faculty Senate were extremely concerned by how members of the presidential search committee were chosen and that the committee wasn’t diverse enough to pick a president that represented GW. When Knapp announced that he was resigning last June, students and this editorial board called for a university president that was more diverse and knew how to connect with students. It would benefit you to address diversity and inclusion concerns as soon as possible and reach out to the diverse community at GW to show you want to be everyone’s president.

You’re coming to D.C. at a very interesting time for students, and we’d be remiss to not mention the other president moving in just a few blocks away. We think it’s essential you realize that the majority of students are not happy with our new neighbor, and Knapp was vocal about protecting undocumented students and other students who have felt targeted by U.S. President-elect Donald Trump’s rhetoric. After the election, Knapp told the GW community to celebrate our diversity, and he signed onto a letter of support for undocumented students. These types of announcements made many students feel like Knapp was their side, and you should be ready to address some of the same issues going forward. It’s likely that there will be more situations that arise that will give you the opportunity to take a stance on students’ safety and comfort.

Students have also been loud about diversity on campus, even before this election season. But now it feels more pertinent than ever to make sure all students have a place at the University. Last year, officials changed the position formerly known as the Vice Provost for Diversity and Inclusion to include community engagement. It’ll be important for you to make sure that diversity and inclusion stay pertinent to the University’s top goals while enhancing students’ relationships with the GW and D.C. community.

Many undergraduate students study the liberal arts, and with that comes some concern about an administrator whose background is mostly in the science, technology, engineering and math field. We hope that you enhance all of our schools’ programs, not just those related to science.

Also, most of Knapp’s criticisms stem from his lack of communication and connection with students. It’s been a rarity to see Knapp casually attend basketball games, theatre performances, a capella concerts or other student-centered events. Students like to know that our administrators care about the things we care about. By showing up to support us, we will be able to trust you to handle problems when they arise. Building trust is the first step in creating dialogue, and that can be as simple as singing the fight song at a basketball game.

At the end of the day, the GW community is probably similar to the community you’re leaving at the University of Miami. We might not be as big of sports fans and we certainly don’t wear our school spirit as loudly, but just like students at any university, we care about our school and we want our school policies and officials to best represent us. If you can open and sustain a dialogue with students, we think we’ll both be happy throughout your tenure.

This article appeared in the January 17, 2017 issue of the Hatchet.