The driving force behind much change at the University over the past decade has been student advocacy, often initiated by the Student Association.

Students spearheaded the push to change the Colonials moniker through a petition in May 2018 followed by an SA-led panel discussing the “negative impact” of the moniker last February. Now, officials are accepting suggestions for a name change.

Officials have also vowed to divest GW’s endowment from fossil fuels by 2025 after more than five years of SA advocacy. Administrators created academic forgiveness policies for freshmen and expanded them for all students between 2016 to 2020 after student advocacy. 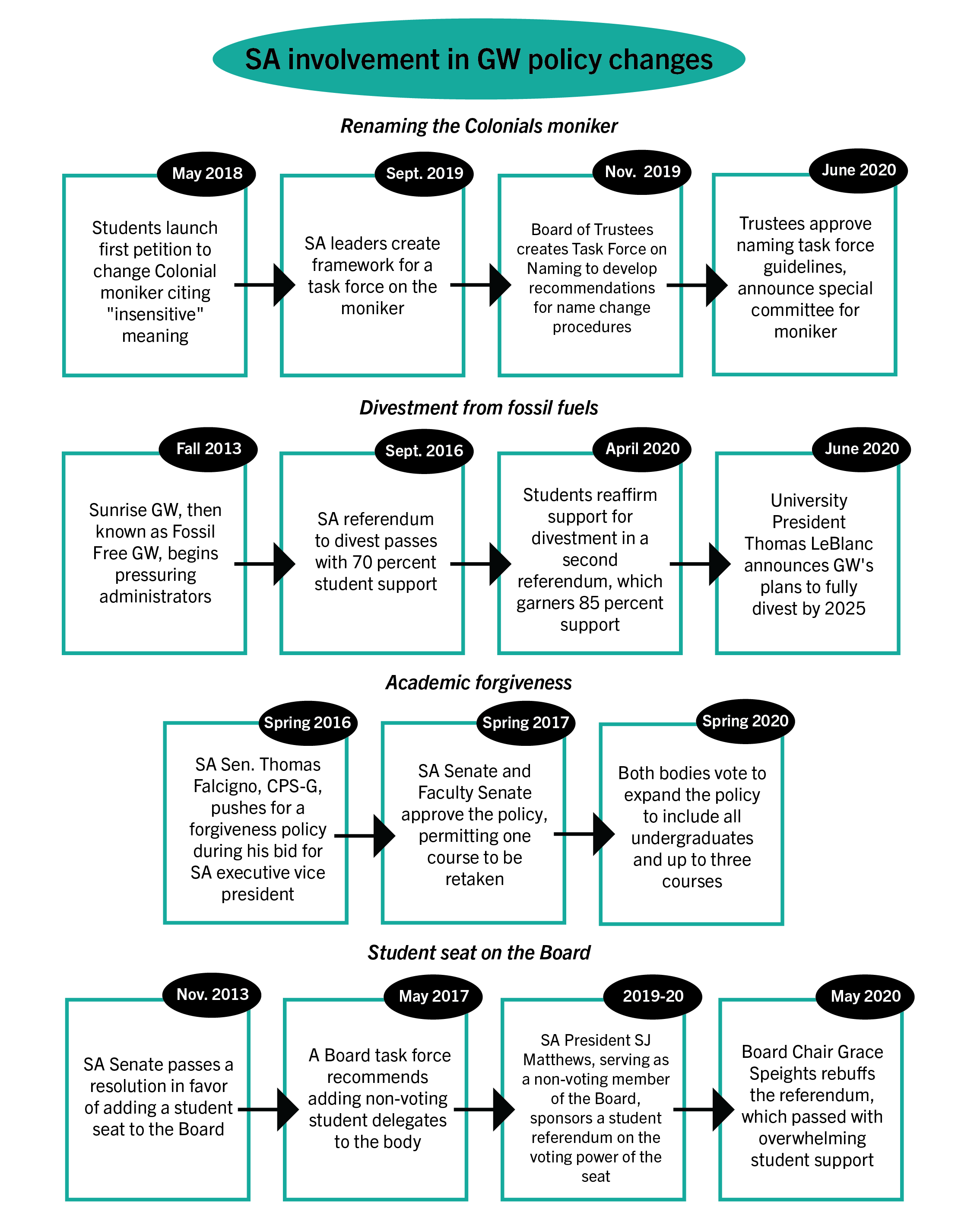 Here are the top policies the SA has influenced over the decade:

Renaming the Colonial moniker
A movement to change the Colonials moniker surfaced in May 2018 when students launched the first petition on GW Voice – an SA-run platform for students to advertise petitions – to change the moniker to the “Hippos” or “Revolutionaries.”

SA senators hosted panel discussions with faculty in February 2019 to talk about the history of the moniker in hopes of pressuring officials to review name change submissions to replace the nickname. Later that academic year, more than half of the student body voted in favor of a referendum to change the nickname.

SA leaders outlined a framework for a task force on the moniker in September 2019, and the Board of Trustees created a building name task force in November of that year to reconsider building names and the moniker. Former SA Sen. André Gonzales, the chair of the SA building and naming task force, said at the time that the University has the opportunity to hold a “unique conversation” to reevaluate its moniker with GW’s bicentennial coming up in 2021.

Most recently, the Board approved a framework to reevaluate GW’s Colonials nickname in June after University President Thomas LeBlanc recognized multiple advocacy efforts, like referendums and student task forces, from SA leaders.

Divestment from fossil fuels
Sunrise GW, then known as Fossil Free GW, began pressuring administrators as early as fall 2013 to break ties with fossil fuels companies, like ExxonMobil. SA senators initiated a referendum on the 2015 election ballot, which garnered 70 percent of students voting to divest.

From 2015 to 2017, trustees declined to communicate divestment options to Board members and rejected the option to divest altogether. The SA Senate voted to call on officials to divest in 2016.

Student advocacy for a fossil-free campus spiked last fall when Fossil Free GW became a chapter of the Sunrise Movement – hosting multiple demonstrations – and SA senators also backed the movement. An overwhelming majority of students later approved a 2020 SA election referendum, and LeBlanc announced in late June that the University will completely divest from fossil fuels by 2025.

The ESG Task Force released a draft statement in June on sustainability recommendations for the University on the task force’s website – where roughly 100 community members entered feedback regarding the drafted statement, she said.

Nosal said Peter Harrison, a Board member and the chair of the task force, hosted two community town halls over the summer, which gathered more than 100 student, faculty and alumni participants.

“We are currently working with our leadership team to designate responsible parties for each of the recommendations,” Nosal said in an email in September. “Carrying out our plan to divest from fossil fuels will be a joint effort between University leadership and the Office of Sustainability in partnership with the University’s outsourced chief investment officer.”

Nosal declined to say how the University will pay for the roughly $1 million cost of divesting from fossil fuels.

Academic forgiveness
Former SA Executive Vice President and current SA Sen. Thomas Falcigno, CPS-G, spearheaded the push to launch an academic forgiveness policy in 2016. The SA Senate passed legislation in support of the policy in January 2017, and the Faculty Senate approved the policy the next month to be reviewed again in three years.

More than 500 students used the policy after its first year – retaking one course in which they received a D+ or lower.

SA senators passed legislation earlier this year to expand the policy to allow all students, instead of just freshmen, to retake up to three courses during their undergraduate years. The Faculty Senate approved the expansion in May.

“It really was a collaborative effort, and the administrators were all on board for it,” Falcigno said in a May interview. “From what I understand, not many of them had any concerns, and they expressed to me that this was a policy in the direction of where they wanted to go, and they just didn’t have student support for it.”

“The recommendations that we gave are specific and outline what we feel would be the best process in terms of selection processes, orientations, terms – really every kind of detail that goes into creating a student representation model,” Feinman said in an interview at the time.

Following meetings between Board members and SA leaders in August 2017, the Board amended its bylaws to allow one non-voting student into the body. Then-SA President SJ Matthews served as the non-voting member on the Board during the 2019-20 academic year and sponsored a referendum on the 2020 SA election ballot to add a student position with voting rights, which passed with 93.7 percent student approval.

Grace Speights, the chair of the Board, said in April that the members were not considering adding a student voter to the body.

“We have no immediate plans to make additional changes, but the Board will continue to consider the views of our community as we move forward,” Speights said.

This article appeared in the December 3, 2020 issue of the Hatchet.