Athletic director Tanya Vogel sought to increase female representation when she took over the program in 2018, but for GW – like its Atlantic 10 peers – the goal is still in the works.

At GW, less than one-third of its teams – seven of 27 programs – are led by female head coaches, ranking GW’s female coaching percentage sixth of 14 in the A-10. Among women’s teams in the conference, less than half – about 47 percent – of squads are coached by women.

In interviews, five female A-10 coaches said female leadership has improved marginally over the years,  but women are often discouraged from moving up the ranks or sticking with college sports in a predominantly male field.

“We have so many female student-athletes that need strong male and female role models,” Vogel said in an August interview. “…The idea that there’s a female AD at my alma mater is something to be proud of.”

Female representation in the A-10, NCAA
A 2019 report from the Tucker Center for Research on Girls and Women in Sports at Minnesota found that during the 2018-19 school year, just less than half – about 47 percent – of the A-10’s head coaches were women. Among 32 Division I conferences, the A-10 ranked eighth, besting conferences like the Big East and Atlantic Coast Conference.

The report gave the A-10 a “C” grade, meaning that its percentage of female head coaches did not meet the 54 percent threshold needed for a “B.” No conference reached a “B” grade, but the Ivy League came closest with about 53 percent, according to the report.

GW’s seven female head coaches place the University in a first-place tie with Rhode Island and Saint Joseph’s for the most in the A-10.

Out of its eight women’s programs, St. Bonaventure does not have a team coached solely by a woman, but the divers in its men’s and women’s swimming and diving program are coached by Stephanie Fleming.

Aylene Ilkson, the head coach of women’s volleyball at George Mason, said she is surprised by how many males are “getting the privilege” of coaching women’s teams. She said women should serve as female role models both within the sport and off the court in team management and personal lives.

“Our young women, like 18- to 22-year-olds need to see women that are in power, that are able to manage staff,” Ilkson said. “That are being an example of what it looks like, not only to lead a team, but also to lead within their university and see how active they are within the department.”

Ilkson is one of three female head coaches of women’s volleyball across the A-10, along with GW’s Sarah Bernson and Jody Rogers of VCU.

Taylor, now in her 17th year as the director of the men’s and women’s track and field and cross country programs and the head coach of the women’s teams in both sports, said she was “fortunate” to have received the opportunity because it wasn’t an encouraged profession.

“Up until that point, the idea of being a college coach had never even occurred to me because it wasn’t something that I ever had a mentor or somebody that said, ‘Oh did you ever think about coaching?’ or was encouraging,” she said.

Susanne Depka, the head coach of women’s tennis at Davidson, said the dual pressure to manage family lives at home and lead a team to success each year could turn women away from seeking leadership positions. She said the time commitment to college squads discourages time off.

Women were more than 20 percent less likely than men to include a “family narrative” in their online biographies, which is defined as mentioning a “spouse, partner, children and/or use of the generic term family,” according to the Tucker Center report.

“You have to be winning, and I think that’s going to take away as well, because you’re really not going to have that balance,” Depka said. “You have to be at work all the time in order to feel like you are going to be successful and continue to be at the top and not get fired. I think that plays a huge role as well in the decision of a lot of females that go into it and have a family.”

Jody Rogers, the women’s volleyball head coach at VCU, said if she was presented with a male and female candidate who were equally qualified, she would likely choose the woman so athletes could “see women in leadership positions.” She said adding female leadership could bolster female student-athletes’ confidence and motivation to seek similar roles.

In March 2019, Notre Dame women’s basketball head coach Muffet McGraw said she would only hire female coaches, which drew backlash for being “sexist and discriminatory toward men,” the Tucker Center report states. But the report states that men still hire male coaches “without scrutiny,” and McGraw’s comment calls out gender bias in coaching decisions.

“I have an all-male staff and that’s worked well for me, but it doesn’t mean that I didn’t want to hire a woman,” Rogers said. “I just didn’t get a significant amount of women applying for the positions at the time, but the male was better, so I always go with the best candidate.”

The Tucker Center recommended swapping one male coach with a female coach at universities over the next five years to increase female representation. The report also suggested replacing retiring female coaches with other female coaches.

Vogel, who is just one of two female athletic directors in the A-10, along with Jill Bodensteiner of Saint Joseph’s, said last semester that she dedicates time to Women’s Leaders in College Sports, serving as a mentor for women seeking a profession in college athletics and providing memberships for female staff members in the athletic department.

Lynn Farquhar, the head field hockey coach at Saint Joseph’s, said an increase in female representation will only happen when universities begin to prioritize placing more women in leadership roles.

“Just like anything, when you see something, it gives you a belief and then you learn from it, you grow from it, and then your younger generation can take that and do the same,” Farquhar said. “So leadership qualities that both men and women have can be outstanding, it’s just a shame because a lot of times we don’t get to see those great leadership qualities that women have.”

This is a multi-part story that will be updated throughout February and March with individual profiles of GW’s seven women’s coaches. The first batch of stories were published Feb. 24, and the last installment will be released March 30. Click on the coaches below to read their stories. 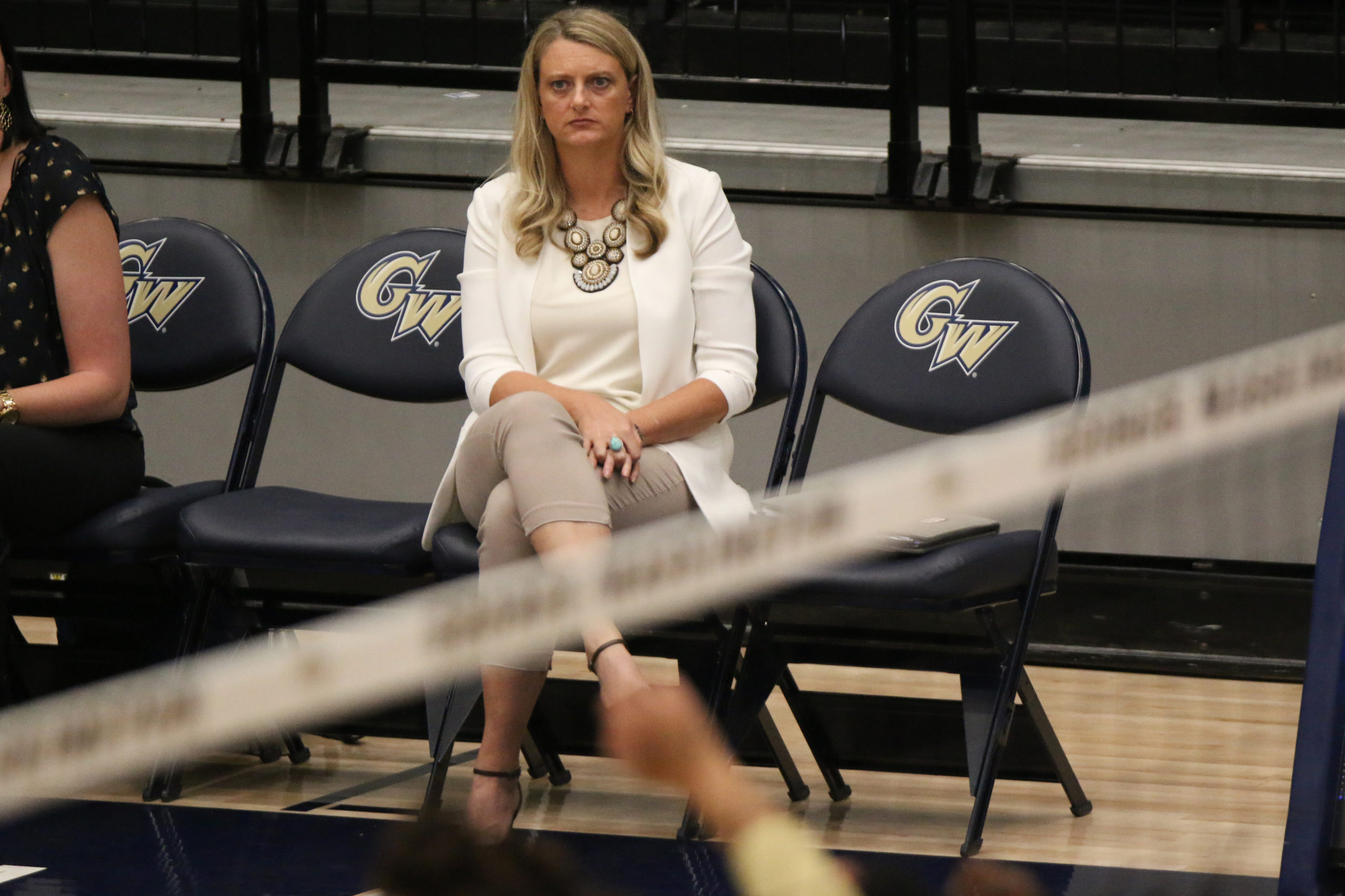 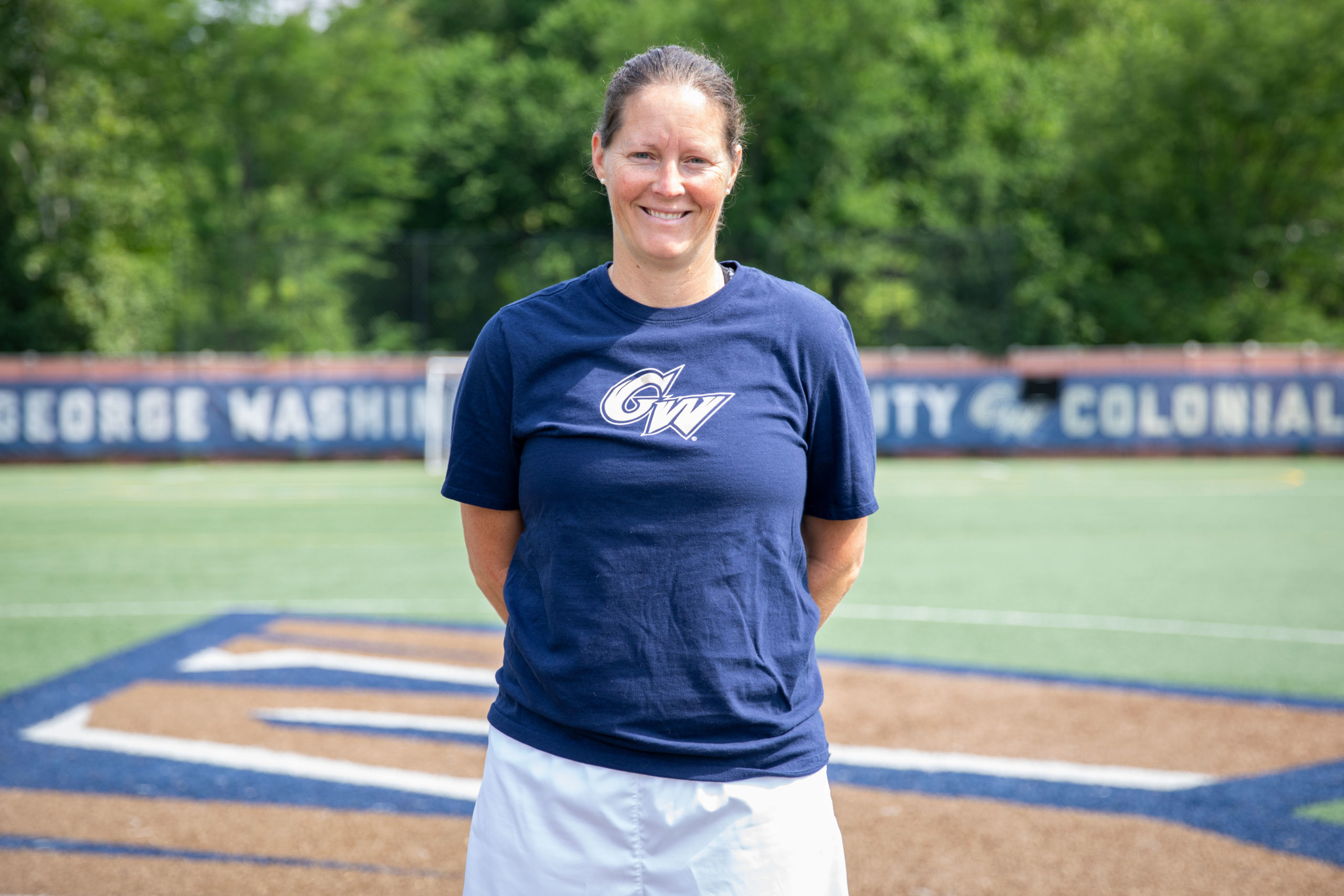 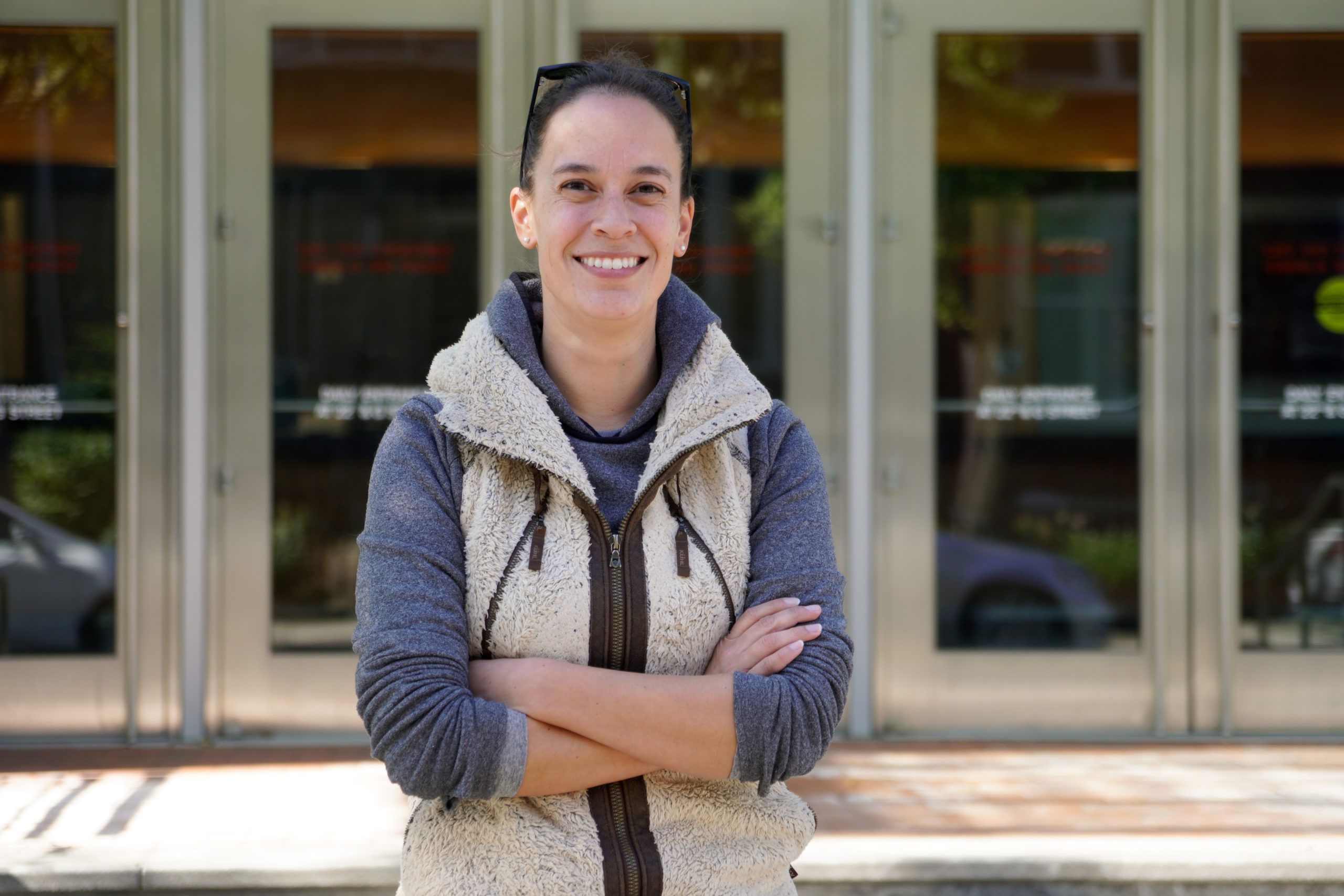 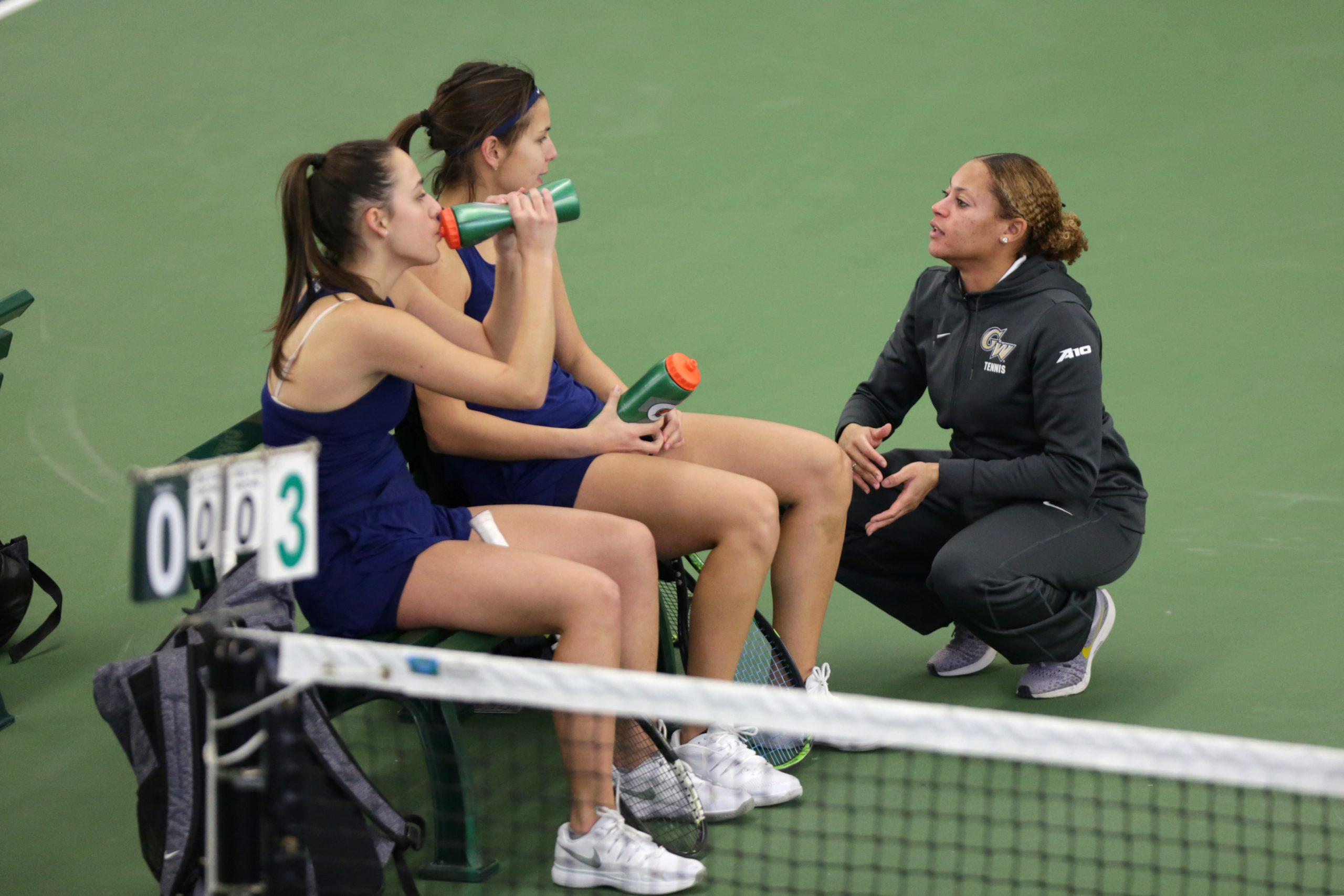 This article appeared in the February 24, 2020 issue of the Hatchet.

Students said that while professors are trying their best to teach, faculty are limited in their ability to demonstrate their knowledge in a topic.

Students to have belongings in residence halls packed, stored until fall for free

After ‘disbelief’ from spring cancellations, athletes stay in touch with online resources

Senior runner and SAAC President Suzanne Dannheim said the athletic department has provided athletes with ways to stay connected with one another.