After junior Robbie Metz gave up four hits, three runs and was yanked from the mound less than an inning into the game, baseball had to play from behind against Davidson in Sunday’s rubber match.

In relief, sophomore Will Kobos pitched five innings and senior Eddie Muhl came in for the remaining 3.1. The pair allowed zero runs on only two hits for the final eight and one-third innings of the game. Both Kobos (1.91) and Muhl (2.14) improved their team-low earned run averages, while Muhl came away with his second win of the season.

“Just a good showing from the bullpen,” Muhl said. “Stopping the bleeding in the first inning, and taking us all the way through the game.”

Once GW settled down, the team’s lineup found its rhythm, connecting for 14 hits on the game compared to six for Davidson. Six Colonial batters had at least two hits in the matchup.

After garnering one run in the fourth inning, GW pulled ahead, scoring three runs with two outs in the bottom of the eighth to lead for first time of the day.

The win came after a lopsided 12–2 loss to Davidson Friday followed by a complete game shutout thrown by freshman pitcher Elliott Raimo on Saturday’s 5–0 victory. Raimo’s performance was GW’s first complete game of Atlantic 10 play and only the team’s third shutout on the season. 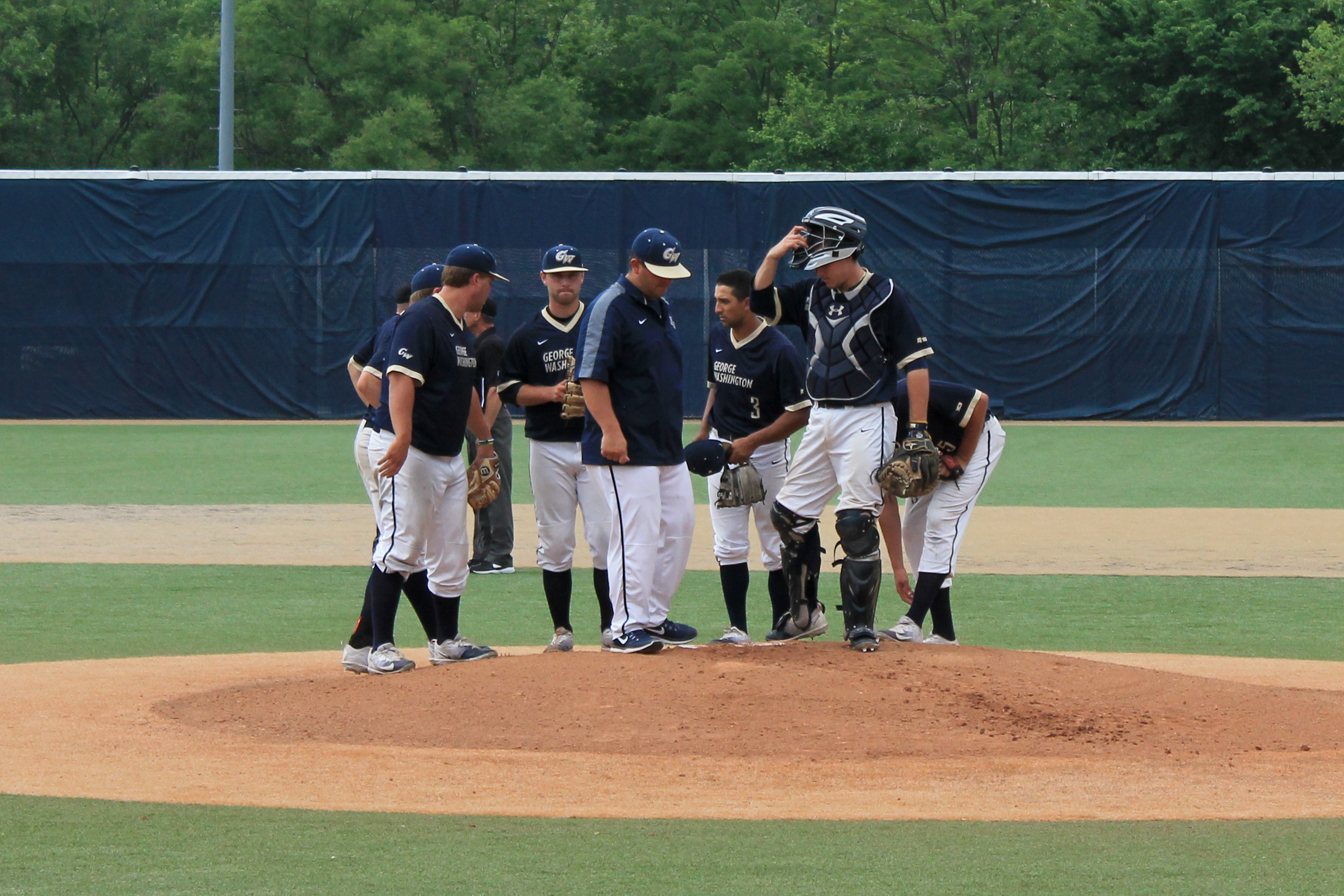 “Losing the first game was kind of like getting punched in the teeth a little bit,” Muhl said. “[We came] back Sunday really wanting to win and we just rode out the momentum and beat a good team today.”

Including this weekend, all five of GW’s conference series this season have been decided by the final game. Sunday’s victory was only the second time the team has won the rubber match.

The Colonials found the hit column for the first time in the game, when senior catcher Brandon Chapman singled with two outs in the bottom of the second inning. He was stranded on first after the next batter grounded out.

In the top of the fourth, Davidson outfielder Cam Johnson doubled for the final Wildcats hit of the game and the last baserunner Kobos allowed.

In the bottom half of the same inning, senior Bobby Campbell scored on an RBI-single up the middle by freshman shortstop Nate Fassnacht.

Between the fifth and seventh innings, the Colonials were unable to capitalize on a single in each inning, stranding three combined runners and scoring no runs.

With two outs and the bases empty, GW hit five consecutive singles to pull ahead by one run in their last at-bat.

“I expect us to keep fighting,” assistant coach Rick Oliveri said. “Today was about fighting, competing and finding a way.”

Metz, who struggled on the mound to start the game, scored the eventual winning run off an RBI-single from Osis.

After this weekend’s series, GW moved up to seventh place in the A-10.

“I think we just we knew we were down, and we knew for us to stay in the A-10 tournament that we had to definitely win this game,” Metz said. “It put us on the right side of the top seven.”

The Colonials return to action Tuesday night on the road against Georgetown. First pitch is scheduled for 7 p.m.

This article appeared in the May 1, 2017 issue of the Hatchet.