Yayoi Kusama’s Infinity Mirrors exhibit, which opens at the Hirshhorn Thursday, lets visitors explore the evolution of the celebrated Japanese artist’s hypnotic Infinity Mirror rooms along with the paintings and sculptures that inspired them.

Melissa Chiu, the director of the Hirshhorn, said this will be the first exhibition to showcase more than six decades of Kusama’s avant-garde and surrealist style, spanning from two-dimensional drawings to interactive exhibits to performance art.

“Her multi-genre approach, we think, is a very 21st century approach,” Chiu said. “There is a great consistency in her works.”

The exhibit is a full sensory journey that begins with an arrangement of whimsical paintings and sculptures speckled with countless polka dots. Many of Kusama’s works use the repeating shapes and dots to create a world with no beginning and no end.

The exhibit includes six of Kusama’s famous “infinity rooms” made of mirrored walls. A visitor’s reflection is echoed through the room by the mirrors, making viewers part of the art. 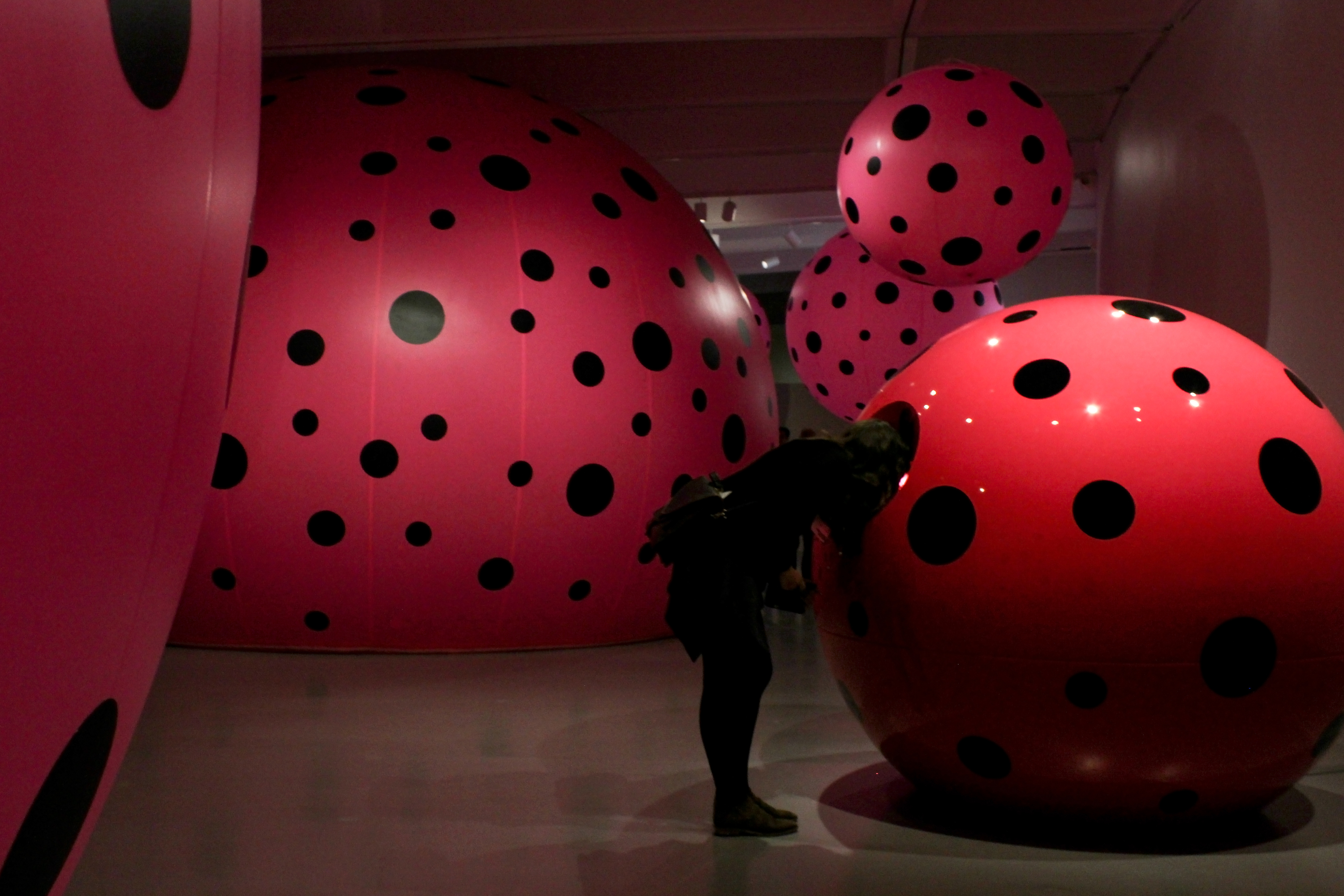 The vibrant color and simple shapes are juxtaposed in another installment, “Aftermath of Obliteration of Eternity.” In this work, golden LED lanterns dangle from the ceiling and glimmer against what appears to be an endless black void.

Kusama’s immersion experience goes one step further by inviting visitors to design their own infinity room. This “Obliteration Room,” which started as an all-white traditional home interior, becomes filled with color, as visitors can place multicolored polka dot stickers wherever they want around the room.

While the exhibit may seem like a funhouse, Kusama’s intentions were far from light-hearted. Her recurring themes of infinity and nothingness explore the space and silence one would encounter after death, Chiu, the museum’s director, said.

“Yayoi Kusama, who, at this stage of her career, is a worldwide phenomenon, has the ability to inspire audiences of all ages with the power of her art,” Chiu said.

The Hirshhorn has been gearing up to accommodate the exhibit by recruiting more than 120 new volunteers and visitor attendants, triple the previous number, to welcome and guide visitors through the exhibition, according to a press release about the exhibit.

“I don’t think we’ve ever had a show where we expected so many visitors,” Chiu said.

The Hirshhorn will be inviting guests to the exhibit through timed passes that allow 45-second visits to each of the six rooms. The passes are released online every Monday at noon for the following week and a limited number of passes for same-day visits will be distributed at the museum every morning beginning at 10 a.m.

Despite the possibility that a post in an Infinity Mirror room could help you rope in hundreds of likes on Instagram, Mika Yoshitake, an associate curator at the Hirshhorn, encourages the public to experience the art first-hand.

“You can’t capture the physical experience you see inside these rooms on a camera,” Yoshitake said.

This article appeared in the February 23, 2017 issue of the Hatchet.