You won’t find many 18 to 24 year olds with inky fingers from flipping through print newspapers, but my generation is far from newsless.

Nowadays, three out of four college students stay in-the-know by scrolling through online sources on their smartphones, according to the American Press Institute, and I am one of them. Every month I reach the maximum number of articles I am allowed on The New York Times and Wall Street Journal websites. With campuses full of “wired” students like me, many colleges have started to offer digital news subscription services. 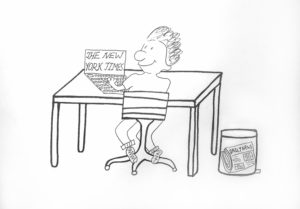 GW should follow other colleges’ leads and provide students with free subscriptions to digital versions of newspapers or other news outlets’ websites. Access to up-to-the-minute news is valuable for all types of students, especially in the nation’s capital where so much of the news is made.

Because of a decline in the number of people who read print newspapers, some universities have transitioned their subscription services from paper copies to digital access. It makes sense to switch those subscriptions because even though 85 percent of students report keeping up with daily national headlines, a measly 15 percent of average 18 to 24 year olds read print editions according to the American Press Institute. This past September, Boston University’s College of Communication started to provide free digital access of The New York Times for students, faculty and staff. Similarly, the student government at Cornell University passed a resolution last November to not renew the contracts of their print newspaper subscriptions and to pursue the alternative online subscriptions.

GW shut down its daily print paper delivery service in 2011 and, unfortunately, didn’t replace it with digital access for students. College students view news as an important part of their daily lives, providing them with an almost equal mix of social, civil and practical benefits, like talking about the news with friends, taking action on an issue they care about and solving problems. In particular, news helps some students feel like they’re becoming better citizens and helps them understand where they stand on hot-button issues. Without a digital replacement, students lose these benefits.

As an inaugural member of the Collegiate Readership Program, GW used to provide daily deliveries of the print editions of The New York Times, The Washington Post and USA Today to newsstands in each residence hall. The University halted the CRP nearly a decade after its inception, citing budget concerns. GW had paid a steep $52,000 a year to distribute print newspaper copies to its students. But that price would have been significantly decreased had GW transitioned to online subscriptions.

Other colleges have cut costs in making the shift: Thomas Fiedler, the dean of BU’s College of Communication, said that by transferring the college’s subscriptions from print to digital this fall, the college cut the yearly cost of $35,000 in half. Additionally, Samantha Romero Zavala, speaking on behalf of the appropriations committee at Cornell, defended their choice to move from print to digital subscriptions as “fiscally responsible and fiscally effective.” To further discount online news subscriptions, some schools, like Fordham University and Middlebury College, have instituted a 24-hour access-as-needed pass similar to the New York Times’ Newspaper Readership Program. Officials may have a experienced sticker-shock after paying for years of unread print newspapers, but that doesn’t have to be the case with digital subscriptions.

Instead of moving immediately to online subscriptions after cutting its paper delivery, GW opted to rely on its preexisting resources as a replacement for the print program, which are not an adequate substitute for online news subscriptions. Peter Konwerski, the dean of student affairs, pointed out at the time that students at GW have online access to almost every newspaper in the country through the University’s Gelman Library free reference database.

The access that Konwerski was referring to, unfortunately, is far from instant. If students want to peruse today’s paper, they have to search Gelman Library’s news stream database that works like a research database, wherein a student has to search for specific terms or dates to get the correct content, which is different from scrolling through a news website. Reference databases don’t allow students to access up-to-the-minute breaking news or even the convenience to “browse” the paper at their leisure which a digital news subscription would provide.

For example, reference library copies of news articles appear on students’ laptops as plain text versions, omitting any corresponding images or graphics. Other universities’ leaders, like Fielder, understand that these multimedia components are a huge bonus to online news subscriptions. After making the jump from print to digital, BU’s College of Communication students have access to The New York Times’ interactive features, “such as the daily briefings, video content and the virtual reality section.” The almost hands-on digital resources that are only available through online news subscriptions would enhance students’ news consumption, which would help them in their classes, too.

Despite the University’s sizable reference library, the convenience and unique features of an online newspaper subscriptions program is unmatched. Digital news access is a cost effective way to ensure that in a city of breaking stories, students aren’t reading yesterday’s news.

Sydney Erhardt, a sophomore majoring in international affairs, is a Hatchet opinions writer. Want to respond to this piece? Submit a letter to the editor.

This article appeared in the January 23, 2017 issue of the Hatchet.