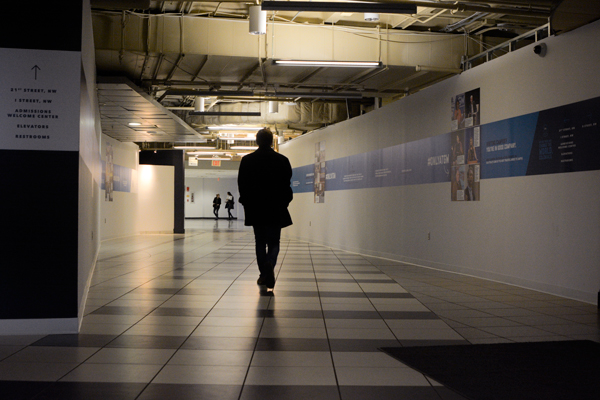 Nearly a year after announcing renovations to the Marvin Center, officials and student leaders say plans are officially underway.

The renovations will transform the main lobby area on the first floor into a “living room” concept with couches and tables, a University spokesman said. Officials said the multi-year renovations will create a comfortable area with a community feel, which could help attract prospective students.

University spokesman Brett Zongker said there have been a number of meetings with student leaders and representatives from offices including the Center for Student Engagement, admissions, external relations, the provost’s office and the Division of Student Affairs.

“At these meetings, student input and design sketches have been provided by various GW stakeholders, and this input has further helped develop the proposed plans for this multi-year phased project,” Zongker said.

While officials are still refining the design, the project budget and timeline will be finalized and included in the capital budget approved at a Board of Trustees meeting this spring, Zongker said.

Zongker added that the project architect has extensive experience building student centers around the world and offers valuable insight on how to create a “living room” space. The architect will also reconfigure the former J Street market area for a new food vendor, he said. Zongker did not provide the architect’s name.

The project was a major goal for former Student Association president Andie Dowd, who ran on a platform that included improving shared student space.

University President Steven Knapp said last year that the renovated space would be a welcoming environment for current and prospective students.

Thomas Falcigno, the executive vice president of the SA, said another meeting with student leaders and administrators to discuss plans for the space is tentatively planned for before the end of the month. They will look at designs from the project architect then, he said.

“These are designs that we have given input to that have gone back to the architect and been redesigned,” Falcigno said.

Currently there is no clear date for when the construction would be completed, Falcigno said.

A new vendor will be added in the former J Street space currently blocked off under construction, though the vendor is still unconfirmed. Falcigno added that there will also most likely be construction in the area that formerly housed a salad bar and other food vendors.

The current designs for the space are based on campus student centers that officials and student leaders toured, including Georgetown University’s Healey Family Student Center, which features fireplaces, study nooks and lounge areas, Falcigno said.

“Those are the types of things we are looking to for our space, whether it can be done is a different story,” Falcigno said. “That is what a lot of the designs are looking at: what can be done with the space we currently have.”

This article appeared in the January 17, 2017 issue of the Hatchet.