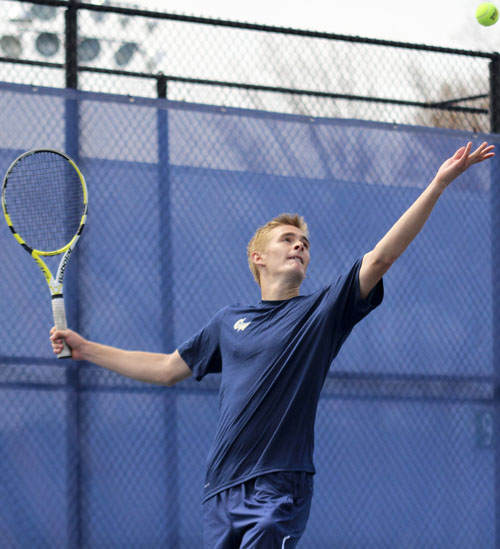 This post was written by Hatchet reporter Aaron Esparza

The No. 57 men’s tennis team took care of business in the quarterfinals of the Atlantic 10 Championship, blanking Dayton 4-0 Friday.

The top-seeded Colonials started the match with a comfortable 8-3 doubles win from senior duo Ulrik Thomsen and Viktor Svensson. The team then clinched the doubles point after senior Nikita Fomin and sophomore Danil Zelenkov won defeated their opponents 8-5.

Tied 5-5 against the Dayton duo of Josh Maylon and Bernardo Sanson, the No. 62  ranked pair of junior Francisco Dias and freshman Julius Tverijonas saw play suspended once the doubles play point had been decided by their teammates’ respective wins.

The dominant display by the Colonials prevented the top three slots from finishing their matches, highlighting GW’s deep roster.

The Colonials will continue play Saturday in a semifinals match against  No. 4 seeded Richmond. The Spiders defeated George Mason 4-1 Friday to advance to Saturday’s semifinal. GW topped the Spiders 6-1 at home in their last meeting on April 5.