The streets of D.C. came alive last week for a bizarre display of revelry.

The embassies of Spain and Colombia brought together performers from their countries alongside American fire eaters, tight rope walkers and knife throwers for Look Both Ways: Street Arts Across America, a series of interactive performances and free events that lasted from May 6 to 12.

The weeklong festivities sponsored by the Kennedy Center showcased 35 artists and companies for performances ranging from street musicians to puppetry and clowns. 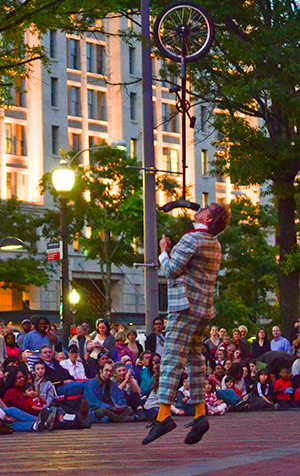 Dressed in bright jumpsuits and matching baseball caps, performers from Circo Para Todos, Colombia’s National Circus School that provides disadvantaged youth with a chance to discover their talents and build careers as professional circus members, worked in teams to perform acrobatic acts such as executing flawless flips and stunts in the air. 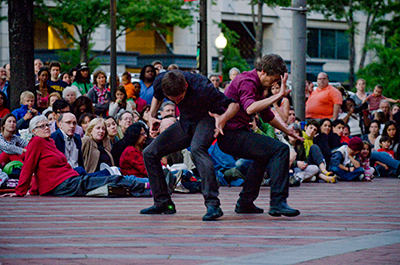 “Taking artists beyond our stages and even beyond our campus to locations across the city of Washington is one way to do that,” he said. “The artists in the festival are intent on breaking down boundaries between the stage and the street, between artists and audiences and between our institution and our community.”

Another act showcased the talents of street performer Paolo Garbanzo, a recipient of the International Juggling Association’s Lifetime Achievement Award. Garbanzo combined fire eating and his razor sharp knives on top of a device that teetered on his chin, inciting both pangs of shock and enthusiastic claps from the audience.

“Why would I only risk one eye when I could just as easily risk two eyes?” Garbanzo said to the crowd while performing the stunt. “If this trick goes wrong, I will go completely blind.”

He performed outlandish stunts all while providing intermittent comedy that kept the crowd laughing. A seasoned performer and Virginia native, Garbanzo was thrilled with the opportunity to be on the streets of a city that he always considered an obstacle.

“Street performing is something that doesn’t really happen in D.C. because of the laws,” Garbanzo, who spends most of his time performing throughout Europe, said. “In America, you have this car culture, and you don’t have a lot of walking. D.C. is one of the few cities in America where you could actually street perform, and of course, it’s restricted.”

The Kennedy Center conducted an 18-month process to seek out artists like Garbanzo and the young members of Circo Para Dos.

“We are seeing the power of art in public spaces to strengthen the sense of place and community, as well as to simply spread joy,” Ross said.

Getting to the Bottom of It: First-year representation in the SA

Officials said they have saved $50,000 and 450 metric tons of carbon dioxide emissions since installing rooftop solar panels last May.