Six students sat silently in the middle of the street holding hands Wednesday when U.S. Capitol Police officers put them in handcuffs.

Demonstrating with about 20 others to kick off the DC Statehood Student Association’s last colony campaign, students marched from Kogan Plaza to the Capitol to protest the District’s lack of full representation in Congress and autonomy over its budget.

With a megaphone in hand, the group’s national president, freshman Markus Batchelor, led the rally to Upper Senate Park, chanting “this is what democracy looks like.”

“That is what hypocrisy looks like,” the ralliers shouted, pointing to the Capitol and flashing signs calling for D.C. to become the 51st state.

But six marchers, including four GW students, were arrested at about 4:45 p.m. when they sat down near the intersection, effectively blocking off traffic.

“I am honored to fight for the people, not just myself, but the people who have lived here their entire lives and gave up the right to be represented,” freshman Matt Laurinavicius, vice chair of the DC Statehood Student Association, said during the march.

Laurinavicius was also arrested, along with Patrick Kennedy, chair of the GW chapter of the DC Statehood Student Association, said.

“It all happened pretty quickly honestly. It all came in a blur. I had prepared myself a week in advance, so I kind of knew what to expect,” Kennedy said. “As soon as we got out there, the police gave us our warnings. But I knew it was all for a good cause.” 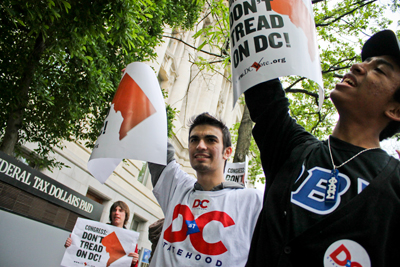 Kennedy said he and his fellow arrested protesters were released by the police within three hours, joking that “three hours was enough time to devote to democracy.”

D.C. mayors must receive Congressional approval to spend local tax dollars and D.C.’s delegate in Congress, Eleanor Holmes Norton, can serve on and vote in House of Representatives committees as well as introduce bills, but does not have the authority to vote on legislation once it hits the House floor.

The DC Statehood Student Association formed last June to engage students in the battle for the 51st state. GW launched its chapter in November, garnering about 10 active members who regularly attend group meetings among a total list of about 40 individuals.

The DC Statehood Student Association’s last colony campaign highlights the District’s lack of Congressional representation. Raising awareness within the student body is the group’s top priority, Batchelor said, because college students originate from different corners of the country and can carry the message to their home states.

“Every movement in history that has been successful has been fueled by young energy,” he said.

A national poll released Monday by DC Vote – an organization that lobbies for the District to receive full representation in Congress – found that 78 percent of the more than 1,000 individuals surveyed believed Congress should not interfere with the city’s budget.

D.C. politicians unveiled an amped up campaign for the District’s movement to become the 51st state in November, which includes creating a centralized statehood website, increasing advertising on Metro buses and making a plan to take their plea cross-country to urge state legislatures for support.

This article was updated on April 23, 2012 to reflect the following:
Due to misinformation from a source, The Hatchet incorrectly reported that five GW students were arrested during the protest. In fact, four GW students were among the six students arrested.