Dressed in traditional Union blues, civil war re-enactors marched down Pennsylvania Avenue as a reminder of history at the Emancipation Day celebration Monday.

City politicians used the April 16 event commemorating President Abraham Lincoln’s signing of the Compensated Emancipation Act that freed D.C. slaves on the same day in 1862 – nine months prior to the signing of the Emancipation Proclamation – to rally marchers for the District statehood cause.

“We have come from slavery, to Lincoln, to [Barack] Obama, to a monument on the Mall for Martin Luther King,” Clarence Davis, D.C. public records administrator and historian, said. “All these issues are tied into this struggle around freedom, liberty, justice and equality that came out of slavery and discrimination and segregation, and fighting those battles.” 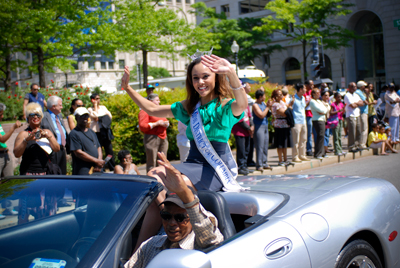 Davis was one of hundreds of people at Freedom Plaza’s festivities marking the 150th anniversary of the signing. Festival-goers wore tags with the number 3,100 – the number of slaves freed by the act.

Tents cropped up at the plaza celebration, featuring singers and jazz music, as well as food and drinks. The celebration also featured a stage for speeches from political participants. A line of stalls sold commemorative T-shirts and marching band figurines.

While Monday’s celebrations lasted through the day and led into an evening fireworks display, the planning committee organizes events year-round that explore themes of race, slavery and life in the District. For example, an April 18 lecture series panel featured Andrew Zimmerman, an associate history professor at GW, who discussed international perspectives on emancipation.

The panel, “DC Emancipation: The Struggle for Freedom, Liberty, Justice and Equality” focused on the years leading up to emancipation, as well as its aftermath and impact on D.C. 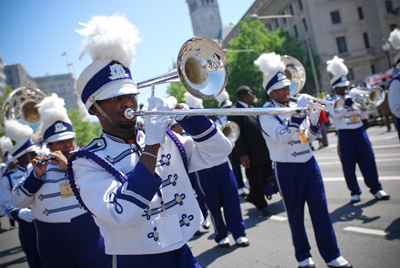 “The idea of rebelling against slavery was not just a U.S. phenomenon,” Zimmerman said. “It was something that existed in colonies all over the world.”

He called emancipation one of the great examples of social change.

“I think we all recognize that this was as much an economic issue as it was a social issue. We are hardly free in this city – although we’re not enslaved in the way we were in 1862,” Gray said.

Davis said Emancipation Day has grown over the years from a small-scale event to one that includes a parade, musical performances and big-name speakers. Legislation passed through the D.C. Council in 2004 to turn the day into a city-recognized holiday, shutting local government offices to commemorate the event.

Loretta Carter Hanes, a D.C. resident, was responsible for “single-handedly bringing back this glorious history to the D.C. community,” Davis said.

“It was primarily an African-American community and neighborhood event that started out in the home of Ms. Hayes. It grew,” David said. “Universities, churches and local organizations began hosting programs and eventually the District planned Emancipation Day as a citywide event.”

Rev. Jesse Jackson capitalized on the celebration as an opportunity to spread the statehood message.

“We want representation! We want our rights! We want change,” Jackson said. “It’s a mixed joy, a blessing, a pain because the people are saved, but not free for democracy. After 150 years, we still do not have the right to vote.”

He said he laments the 15 decades that D.C. residents have spent without full representation in Congress since the city’s slaves earned freedom.