After students spent hours in the sun at Guthridge Park mobbing tables of free tank tops, jumping in a bounce house and snapping up free swag from sponsors, the rapper performed hits like “Bonfire” and “Heartbeat” as the crowd sung along. Even Gambino’s live band jumped around infectiously during the high-energy show. 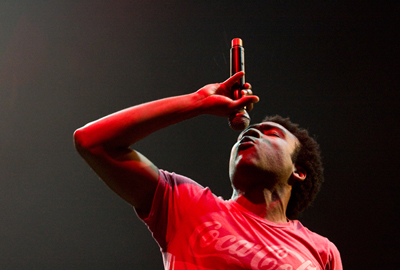 Childish Gambino is the stage name of actor and comedian Donald Glover, star of the NBC comedy “Community” and YouTube sketch comedy troupe Derrick Comedy. His debut album, “Camp,” was released in November.

Earlier in the afternoon, students decked in free Spring Fling tank tops and sunglasses courtesy of HBO rocked out to music from WRGW outside, while others grabbed meals from the array of food trucks lining G street.

Despite the warm weather, this year marked the first time the concert was specifically scheduled for the Smith Center. Last year, Spring Fling, headlined by Mike Posner and Chiddy Bang, was moved inside due to rain.

Program Board Concert Chair Ben Klein said the group chose Gambino because of his depth as both a musician and a comedian.

“We didn’t want to pick someone who’s very popular on the radio right now. Instead, we wanted someone who could really ensure a full-on performance,” Klein said. 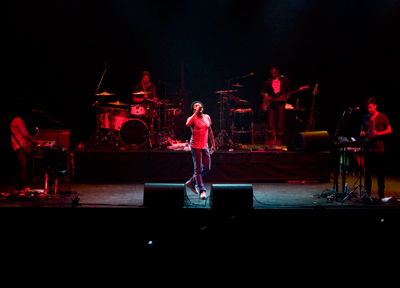 Die-hard fans like sophomore Scott Traum began lining up outside of the Smith Center at 2:30 p.m., four and a half hours before the main performance started. Traum, who followed Glover’s acting on Community, said he has been listening to Childish Gambino since the release of his first album.

“I was a little disappointed, because I thought he would do more comedy,” Traum said. “But his freestyling is really incredible, and the encore, as a whole, was amazing.”

Traum said he was pleasantly surprised by the size and energy of the crowd, many of whom, like freshman Neeki Ahmadi, were not previously familiar with Gambino’s music.

“It was very lively and fun, even though it’s not the type of music I normally listen to,” Ahmadi said.