Relating to a discovery of sexuality wasn’t a stretch for the cast of “Spring Awakening.”

Members of Forbidden Planet Productions felt the lascivious nature of their songs and script was easy to connect with, because, while the over 100-year-old lines have aged, the content still relates to adolescent struggles today.

While teen problems have remained the same for the past 100 years, the play’s characters’ means of communication slightly differ. Instead of secretly texting their frustrations, the characters set their problems to music.

“These characters build to such a heightened emotional state, that all they can do is sing,” the play’s director Jordan King said. 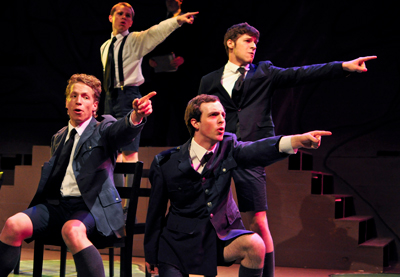 In the song “The Bitch of Living,” lead characters Melchior and Moritz, played by freshman Chris Licata and sophomore Jordan Morrisey, respectively, bang their chairs angrily alongside their equally exasperated classmates, belting out the disgruntled teens’ inner frustrations.

“God, I dreamed there was an angel / Who could hear me through the wall / As I cried out, like in Latin / ‘This is so not life at all!’ ” Moritz sings.

Admitting that initially he was not enamored with the musical, King said that the fact he was able to relate to the nature of “Spring Awakening” drew him into appreciating the story’s message and sparked his interest in its production.

“I think once you start to understand how beautiful the lyrics are and the way Duncan Sheik crafted the songs to really form interior monologues, you stop looking at them as concerty, angsty teenager songs but actually as expression,” King said.

The play focuses on young teenagers growing up in turn-of-the-nineteenth century Germany. They are struggling to piece together the puzzle of their own sexuality and the changes they embark on while growing up – confusion with which nearly any generation of adolescents can commiserate.

“We’ve all felt that – where we’re just sitting in class, and you just want to yell about how frustrated you are,” Morrisey said.

The script was originally written as a play by Frank Wedekind in 1892 and adapted as an alternative-rock musical by Sheik and Steven Sater, first premiering off-Broadway in 2006 and winning the 2007 Tony award winner for Best Musical. 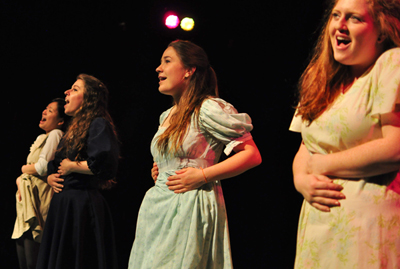 With provocative scenes, focusing on both polarizing themes of sex and suicide, “Spring Awakening” examines both the dark and beautiful experiences that form the framework for adulthood.

“I think every kid goes through a time where you’re searching for something. Whether it’s sexual or personal trials, problems at home,” King said. “How you get through it, or not, really hasn’t changed in a 100 years.”

While sex plays a huge role, so does a battle with depression and suicide, as Moritz ultimately cannot accept the pains of growing up, taking his own life.

“I kind of had to isolate myself a little bit after certain scenes. If I was the character, if I was Moritz I wouldn’t speak to anyone after certain things happened. You just have to keep that whole mindset going to connect the scenes,” Morrisey said.

Junior Kaiya Lyons said the sexual nature of the show was sometimes a challenge for the crew to get through without a little laughter.

“There are lots of innuendos that happen during rehearsal, but you have to be able to get out all the giggles and just get to the real heart of the show, which is these kids,” Lyons, the artistic and musical director for the show, said.

At the end of Act I, the significant turning point in the musical, Melchior and lead female character Wendla, played by freshman Nina Lupan, comfort one another in a hayloft during a storm. In a vulnerable moment, the two reach a culminating point in their relationship, making love in the secluded barn.

“There is always this double standard, you know people can do Shakespeare and can kill 10 people on stage, but its really hard to talk or show nudity, or anything with a sexual spin to it,” King said.