At the end of her freshman year on the women’s lacrosse team, Sarah Phillips boasted an impressive list of accomplishments.

She was the A-10 Rookie of the Year, finished second on the Colonials, tied for seventh in the league with 18 assists, achieved the third-most points for a freshman in program history and was named to the A-10 All-Rookie Team. 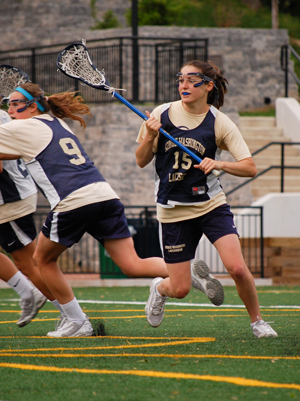 Media Credit: Samuel Klein | Hatchet Photographer
Phillips looks for an opening for a clean pass Monday. The senior netted her 100th career goal as a Colonial during GW’s contest against Massachusetts April 1.

In the three years that followed, Phillips made a name for herself as a player who’s continually able to see an opening on the field, dodging her way around opponents to find a clear shot at the net. The senior’s offensive spark is one of the Colonials’ most dangerous weapons, head coach Tara Hannaford said. Her energy is a burst of firepower that propels Phillips to tally goals and set up her teammates for scores of their own.

“Teams are surprised by her. We wanted the ball in her hands,” Hannaford said. “Our goal was to get her the ball, and she wants the ball. She is much more composed and confident. Her assists are incredible.”

It’s a style of play that proved successful. As Phillips rounds out her senior season, she holds the title for GW’s career assist leader, scored her 100th goal April 1 and tied for the second-most goals scored in a game in program history during a match against Richmond April 6.

But she said her most intense focus isn’t on on her personal accomplishments, but rather on setting up her teammates. Even though Phillips was aware she was closing in on 100 goals, there was another statistic to which the senior paid more attention.

“I think, personally, I would rather have assists than goals,” Phillips said. “I mean, there’s kind of a countdown on all of the articles, so I knew it was coming.”

Hannaford said Phillips will be remembered as a Colonial who played with confidence on the field. It is a presence that is was evident from Phillips’ freshman accolades and the measured calm with which she now takes to the game. 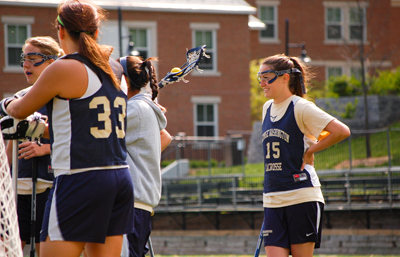 Media Credit: Samuel Klein | Hatchet Photographer
Senior midfield Sarah Phillips gathers with her teammates after a drill during a Monday practice at the Mount Vernon Campus. Phillips is the women’s lacrosse program’s all-time leader in assists and said she is often more focused on finding openings for teammates than adding goals to her stats columns.

“We definitely had adversity on the team with injuries. Sarah came along at the end of the year. She had become confident,” Hannaford said. “She gets the job done.”

The senior’s confidence comes through in her play as she weaves down the field in a beeline to the net. Not much about her style of play has changed since she first donned a Colonials uniform, but Phillips said she’s become more vocal in her motivation for the rest of GW’s roster.

“I’m more of a leader on the field now than I was when I was a freshman,” Phillips said.

This season is bittersweet for Phillips – one where she’ll see her career in GW garb come to an end.

The end of this season spells change for Hannaford, too, as she prepares to graduate five seniors from her squad. And while the head coach can prepare to fill the inevitable roster openings, she said it would be tough to find a substitute for Phillips.