Crowning a freshman takes a lot of time, energy and rehearsal. 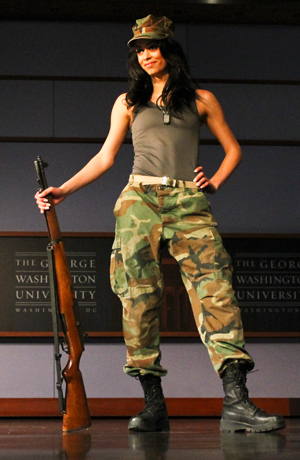 Sponsored by the Alpha Kappa Alpha Sorority, Incorporated, the pageant competition is open to all female freshmen.

Freshman Fionnghuala O’Reilly said she wakes up every morning by 7 a.m. to get to her classes at 8 a.m. The systems engineering major and double minor in business administration and naval science said that after sitting through three or four classes every day, she tries to take a quick nap and do homework before the nightly two- to three- and sometimes even four-hour pageant rehearsals.

“We practiced the dance, our walking, our interview – pretty much everything,” O’Reilly said.

O’Reilly said waking up on a Saturday to be at practice by 10 a.m. was not always the easiest choice, but that bonding with her fellow contestants has made the sacrifices more than worthwhile.

For the pageant, the women choreographed a dance, and each preformed a talent. They also practiced public speaking and learned how best to articulate questions in the short answer response section of the competition. A mentor in the sorority helped guide them through this process.

“It was a very long journey,” contestant Dominique Jones said, adding that practices could run long as the weight of tests and homework also took their toll.

Jones said taking 17 credits this semester on top of rehearsing taught her time management skills and helped her overcome her personal shyness and fear of public speaking.

The event serves dual purposes, creating an outlet for freshmen to meet each other and older mentors in the sorority, while also raising money for charity. This year’s donation recipient is Heifer International.

The community service aspect is something O’Reilly says attracted her to the pageant.

As part of the service component, she went to Miriam’s Kitchen. 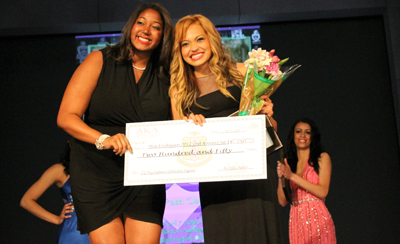 “One thing on my bucket list is to be in a pageant, and now that I did it, it didn’t really matter to me who would win,” she said.

O’Reilly not only crossed it off her list, but she won too, taking home the crown and sash, along with the first place award, a $1,000 prize.

The first runner up award, a $500 prize, went to Francisca Cromwell and the second runner up prize, a $250 award, went to Dionne O’Bannon.

Alumna Raquel Pinkney founded the pageant and was in the audience Saturday to cheer on her younger sorority sisters and their freshman contestants.

Pinkney says she founded the event as a way to give back to the community, while specifically keeping the minority community in mind, and to introduce freshmen to each other outside of class while completing community service.

“To see something that you created and that you only thought was going to be happening that year, to know that people enjoy it so much and that they are going to continue with its legacy, that is such a great thing,” Pinkney said.

She added that her time planning the pageant taught her how to be a great event planner, to be a team player, a negotiator and how to be prepared for the real world.

As this year’s overall winner mingled with her friends who came out to support her and hugged her mom, who travelled to the pageant from North Carolina, the Naval ROTC member said while clutching her crown, flowers and sash, skydiving was the next challenge to cross off her list.