The actors reviving a century-old play know they must make the audience laugh will jokes that could have easily soured since the year Ellis Island first opened as an immigration center.

The 14th Grade Players produce “Charley’s Aunt,” a British farce first performed nearly 120 years ago. The actors’ goal is to of make the audience laugh, of course, but it is also to leave playgoers with a new perspective on the sometimes overlooked power of comedy.

“Comedy always gets looked down upon. People always say that a really good play is one that can move you – that can change your worldview – or change your mind about something. My thing is that comedy is just as hard, it’s just as good if it’s done well and it’s just as important,” director Zachary Gibson, a senior, said. 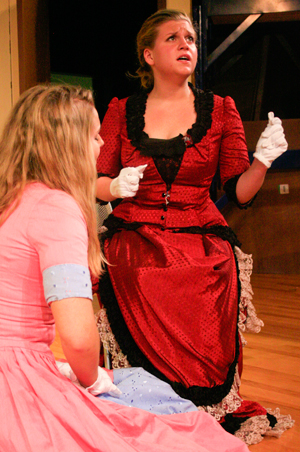 “Charley’s Aunt” contains all the elements of a classic British farce. Set in upscale Oxford, England at the turn of the 20th century, an absurd and improbable plot which includes mistaken identity and disguise combines with a heavy dose of wordplay and slapstick humor. The mixture creates a hilarious tall and twisted tale.

“It’s funny, not because of the jokes or the lines, but because of how easy it is to relate to the characters and the frustrating situations they’re in,” Gibson said.

Lead characters Jack Chesney and Charley Wykeham are two college friends, who have fallen in love with Kitty Verdun and Amy Spettigue, respectively. When they get word that the girls’ overprotective guardian is out of town, they jump at the chance to confess their amorous feelings. The duo convinces their newfound millionaire relative, Donna Lucia d’Alvadorez, to play chaperone.

After their pretend chaperone fails to show up, they lure in a naïve student to play the part, complicating the plot, and hysteria and hijinks ensue. The twisted plot moves at a speedy pace and as the audience tries to keep up, inevitably being thrown on curves and turns along the way, the humor stays light, upbeat and continuously surprising.

“When you laugh at something, it is a physical reaction – you literally feel happy. No drama can have that effect for two hours the way a comedy can,” Gibson said.

Although the play features a zany plot and is heavy on original slapstick humor, the cast also stays true to the time period, donning historical garb and testing out their best British accents.

“Everyone is hilarious on their own, even without scripted, funny lines,” freshman Tori Kontor, who plays Ela Delahay, a young orphan who accompanies d’Alvadorez, said. “We’re always laughing backstage and during rehearsal. We get close.”

Gibson urged all actors to understand the humor and add their own personal style to it.

Hilarious humor, more than anything – everyone involved in the production seems to agree – will overcome any gap created by time.

“The characters are relatable anyways. They’re college guys, having a good time, and they’re obviously funny. Everyone can connect with humor,” Kontor said.

As much as the show relies on the cleverness of wordplay and a complicated plot, the slapstick comedy and cringe-worthy moments also provide endless subplots of entertainment.

The test, sophomore Rebekah Meyer, who plays d’Alvadorez, said will be opening night.