University President Steven Knapp signed a city-wide sustainability pledge Wednesday put forth by the mayor to step up colleges’ commitments to green living over the next two years.

“I want the District to be the world leader in sustainability, and this pledge will help make that a reality,” Mayor and alumnus Vincent Gray said at a gathering at American University. 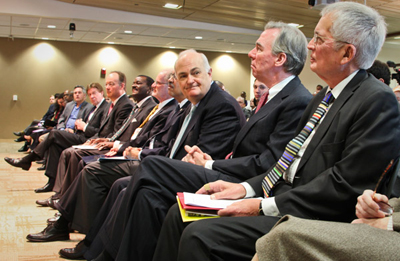 The schools agreed to develop and implement individual sustainability plans by the end of this year and collectively report achievements in August 2014. Examples of commitments include purchasing renewable energy, achieving Leadership in Energy and Environmental Design certification for campus buildings and reducing stormwater runoff.

“We’re all in this together. We are very much in and of the District of Columbia, and the more we can pull everyone together and mobilize all the institutions in the city, the more effective our own internal strategy will be,” Knapp said.

The University’s pledges include reducing energy usage in buildings by 35 percent, as outlined in the Climate Action Plan of May 2010, reducing bottled water consumption and expanding capacity for growing food sustainably on campus.

Becoming more eco-friendly has been a priority for Knapp since his arrival at the University, demonstrated by his founding of the Office of Sustainability the following year.

“We’ve always said our focus in sustainability is on urban sustainability, and a lot of the issues talked about here are right at the heart of that,” Knapp said.

GW recently launched a sustainability minor, uniquely housed in the provost’s office to encourage interdisciplinary learning. The University also pledged to provide support and funding for faculty who engage in sustainability-focused teaching.

The city was named a green power community by the Environmental Protection Agency in 2011. The District is a leading city per capita in LEED-certified commercial and institutional green buildings, according to the Green Building Council.

Sophomore Miles Milliken, an eco-rep for Mitchell Hall who attended the event, said the multi-college partnership will encourage green initiatives.

“While it is just a signature on paper, that does mean something, and it shows that our presidents actually care about the environment,” Milliken said.

The mayor lauded the university presidents for their collaboration, and said he looked forward to one day declaring D.C. as the most sustainable city in the nation.

“This is an exercise in saving the planet for future generations to come,” Gray said.

This post was updated on March 1, 2012 to reflect the following:
Due to an editing error, The Hatchet incorrectly reported the date Knapp signed the pledge.