Felipe Zambrano is always on call.

From homesickness and break-ups to family deaths and 3 a.m. arrests, being there and being ready to talk is part of Zambrano’s job description.

House proctors like Zambrano are live-in peer mentors stationed in each of the 11 freshman dorms, who assume the responsibility of guiding residents through freshman year.

Thurston Hall, the largest freshman dorm on campus, has the highest concentration of these live-in mentors. Of the 50 house proctors on campus, 18 of them live in the 83-year-old Thurston Hall to serve about 1,000 first-year students. 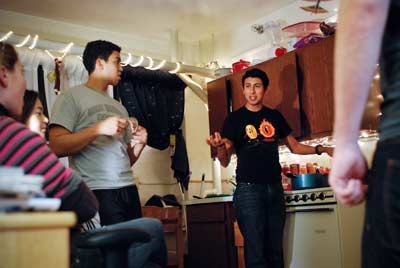 The proctors must balance a full course schedule and extra curricular activities while helping manage the lives of about 60 residents – many of whom are living away from home for the first time. Proctors are required to make themselves available to residents at least 10 hours a week, but the job often extends past 40 hours a week, proctors said, as most floor incidents require their presence.

A friend and a mentor

Zambrano, a junior and house proctor on the ninth floor of Thurston, tries his best to ensure that his room is a safe place for his 63 residents to relax during their free time.

“What do I always say to you guys? ‘Don’t ask, just eat it,’ ” he said to two freshmen who questioned the cinnamon tea he gave them upon walking into his room.

With decor ranging from a Lil Wayne poster to a Batman cape hanging on the wall, Zambrano’s room appears to be the home of an average student.

But Zambrano’s presence on the floor goes beyond the confines of his four walls. Zambrano said he makes an effort to get his face out there for his residents by going door-to-door just to check in.

“It gets a little bit awkward just me randomly popping in, but I try to just go with it and keep asking questions as to whatever’s happening, just so I know what’s going on with them,” Zambrano said.

Zambrano said he prefers to keep a friendly dynamic with his residents that is not too professional. He said his hope is that they will feel comfortable coming to him if they ever need anything.

A biomedical engineering major, Zambrano is in a unique position as a proctor, since the majority of his residents belong to the School of Engineering and Applied Science LLC. He said this allows him to relate to his residents on both an academic and social level.

But the close bond Zambrano feels with his residents introduces a challenge. Zambrano said it can be difficult to maintain the boundary between friend and mentor.

“While I know we’re on a friend-to-friend basis, I’ll always ask them permission to enter the room and things like that where I still have to follow my job’s guidelines,” Zambrano said. “I’m still always present as a house proctor, so I have to always be mindful of what I’m doing.”

For many residents, the house proctor’s role in the dorm is clearly defined and serves as a benefit to the freshman year experience.

Geoffrey Sokolowski, a senior who worked as a house proctor his sophomore year, said the position taught him many lessons he could not have learned anywhere else.

Sokolowski oversaw 27 freshman residents on the first floor of Thurston Hall and also worked as a house scholar for half of his junior year, overseeing sophomores in Francis Scott Key Hall.

“I had a really good experience both years on house staff, but I don’t miss it,” Sokolowski said.

Sokolowski said one of the main challenges he faced was planning his schedule around his house staff duties. The sporadic nature of a house proctor’s commitments made it virtually impossible to have a daily routine, he said.

After his first semester as a house proctor, Sokolowski realized his grades had dropped. He struggled to find a balance between his job, academics and his personal life.

“You wake up and have your schedule, but you always know it could be interrupted at 3 p.m. and you could be busy with something else for two hours,” Sokolowski said.

On one occasion, his lunch was interrupted by an urgent e-mail from a resident informing him of a roommate conflict in the dorm. Though Sokolowski had plans to meet his friends, he instead spent the next half hour mediating a conversation between four roommates.

Though he felt frustrated by the interruption to his day, he said he still put 100 percent effort into helping the residents resolve the issue.

Moments such as these quickly taught Sokolowski the importance of reserving time for himself. He would sometimes close his door or spend time away from his room, allowing himself to focus on his studies or just relax.

In retrospect, Sokolowski said having a support network is crucial to the job.

Aside from the support of his friends and fellow house proctors, he said the Housing Program helped by acknowledging the staff as students first and members of house staff second.

“If something does come up and you can’t handle it, someone else is always there to deal with it for you,” Sokolowski said.

Tim Miller, the associate dean of students for student engagement, said members of house staff are faced with a unique challenge in that they do not just focus on their own lives, but they also must worry about what happens in the lives of their residents.

In the fall, sophomore Kelly Bartz, an eighth floor Thurston house proctor, was at cross-country practice when a resident called to report that another resident was in the hospital. Bartz had to hurry back from practice, cancel the meetings she had scheduled and rush to the hospital to see the resident.

“Bottom line, if a resident needs something, the important thing is that they need something. It doesn’t matter how big or how small that seems to me,” Bartz said.

This type of self-sacrifice is common for many members of house staff and begins even before the first class of fall semester.

House staff members cut their summer breaks short to complete roughly three weeks of intensive training before beginning their jobs in late August. Bartz took part in every aspect of the preparations, but felt the on-the-job experience provided its own unique lessons.

“There are things that I feel like no one can ever really be prepared for until you’re kind of thrown into the moment of it,” Bartz said.

Topics the part-mentors-part-caretakers are expected to be ready for range from issues of mental health, eating disorders, loss of a loved one and sexuality.

Regardless, Bartz often reflects back on a portion of training called, “So You Think You Can House Staff?”

The role-playing exercise comprises the final days of training and allows new house staff members to play the role of house proctor for returning staff members who act out possible scenarios freshman residents might face.

Angela Esquivel, community director for upper Thurston, said that while training prepares house staff members for daily interactions with residents, it also aims to prepare them for some more challenging situations they could encounter.

“We’re primarily trying to equip them with skills for active listening and reflective responding that can be universally applied, regardless of the conversation that you’re discussing or the topic that’s being addressed,” Esquivel said.

Esquivel said a major approach new staff members learn is to talk through residents’ problems, rather than giving advice. This helps the residents come to a conclusion which is truly their own, not that of the house proctor or house scholar.

This article appeared in the February 9, 2012 issue of the Hatchet.

The DHS Science and Technology Directorate tapped GW to house a center to train graduate students in homeland security technology.