His addiction to prescription pills and illicit drugs dominated his life – until last year when he made the choice to stop.

Rabolt, now a freshman in the GW School of Business, is a student in recovery. He is not alone.

Breton Novelli, a senior, started drinking when he was 13 years old. Since high school, he has tried opiates, heroin, cocaine, crack-cocaine and methamphetamine.

Both are among a group of about 18 students in recovery who have approached Assistant Dean of Students Tara Pereira about their battles with addiction, looking for support.

“It’s a population that I started being increasingly concerned about, because they’re coming here in recovery, and it’s like going from the frying pan to the fire,” Pereira said. 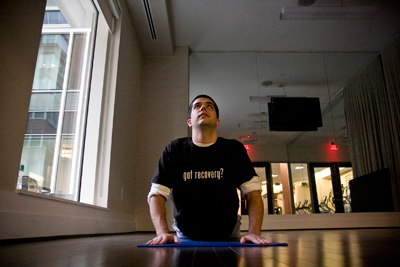 Thursday evening, for the first time, Pereira, who oversees the University’s behavioral and substance abuse prevention offices, will gather recovering students, with the hopes of developing a type of support network that has never existed at GW.

Pereira plans to use their feedback to begin regular on-campus meetings for addicts and to form a recovering student organization. She is also working with Housing Programs to designate clusters of rooms in residence halls for recovering addicts – a more stringent extension of GW’s existing sober living agreements.

When he switched to a new high school in 2007, Rabolt joined the wrestling, baseball and football teams to make friends. When he still felt excluded, he gravitated toward a group of older kids who drank and smoked.

He found himself using marijuana regularly.

“I felt like I needed to have something in me to go out and dance, or go to a sports event or to have fun,” Rabolt said, adding that he believes he was born with an addictive personality.

Rabolt began buying prescription drugs – mostly performance enhancers like Adderall – during his junior year of high school, using money he earned as a busboy at a restaurant near his Delaware home.

“People think, because they’re prescribed by a doctor, that they’re totally okay,” he said. “[Adderall abuse has] become a pandemic, because it just seems like it’s totally okay to do.”

Rabolt would lay out lines of crushed OxyContin – a prescription opiate meant to relieve severe pain – on his desk before bed so that it would be ready when he woke up in the morning.

“I needed the first fix just to feel normal,” he said.

The windows of his car were tinted, shielding him as he’d do another line in the high school parking lot. After daydreaming during his first class, he’d make excuses to get back to his car before study hall so he could do another line. After that, he’d sneak into a corner of the library or head back to his car to get his next fix. Then came lunch – another line. The afternoon was the same, until 2:30 p.m. when school got out, at which point Tim would go home and smoke with friends or use by himself.

He hid the habit from his family.

“Addicts are the most manipulative, sneaky people,” Rabolt said.

Novelli, too, justified the pills and looked for ways to fund his habit. He learned how to forge prescriptions using images online, obtaining large doses of OxyContin with refills. The pills sold for $80 each, funding his addiction.

“Junkies” and “dirty doctors” fueled his habits, as Rabolt burned through his busboy paychecks and savings bonds, even selling his electronics and season tickets to the Phillies on the Internet.

Rabolt turned to dealing marijuana after he lost his job at a bar for smoking weed during a shift. Running out of money, Rabolt got desperate. He described the floor plans of his friends’ homes and their schedules to criminals he knew – setting them up to be robbed. He got a cut from the loot.

“Somehow I never got arrested, never failed a drug test, no one ever caught me. I never got in trouble, nothing ever happened. There were no consequences externally. But inside, I wanted to die, because I was so miserable going through that same process every day,” he said. “I knew I was gonna either die doing [pills] or die by trying to get more.”

Novelli, who had been arrested several times, once for public intoxication, became addicted to heroin.

“It was amazing. It was the best rush. It was like sex, but I wasn’t moving,” he said.

Both spiraled deeper into addiction, Novelli during college and Rabolt in high school.

Novelli remembered giving a homeless man $5, “just to see what he could get” When the man came back with crack, the pair smoked it in a stairwell of JBKO residence hall.

It was just one year ago when Rabolt sat at a Superbowl party, high, with girls on his lap, surrounded by other stoned people.

“I felt like I was the only one in the room. I never felt more alone,” he said.

Novelli took a break from GW during his sophomore year, and after a violent roommate conflict last year, he left during winter break of what should have been his senior year. He went into rehab in Texas.

Rabolt believes that divine intervention made him realize he needed to quit pills, but being in a college atmosphere presents temptation after having quit during high school, he said.

“It’s kind of impossible for students in recovery here to come together,” Novelli said.

He and Rabolt are enthusiastic about starting on-campus meetings and a student organization, something Pereira said she hopes will begin this semester.

“Students will come to campus with learning disabilities, for example, and know that they’re going to seek out [Disability Support Services],” Pereira said. “I want students [in recovery] to come here and know as they’re walking in the door at [Colonial Inauguration], there are services here to help you.”

The age range of other Foggy Bottom meeting participants isn’t easily relatable to students, Novelli said. Putting a student-aged meeting in place is a priority for Novelli before he graduates in May.

“It’s hard going to meetings on Foggy Bottom with professionals, who are complaining about things like divorces and child custody and careers that they’ve lost when you can’t really relate to that when you’re a college student, and you’re complaining about your parents and financial aid and your studies,” Novelli said. “It’s a totally different world.”

Novelli has been clean for more than a year, and Robalt has for about 10 months.

“I feel like an old man sometimes,” Novelli said of his decade-long battle with substance abuse.

Now Novelli is looking for a job in communications. Rabolt wakes up by 7 a.m. every day to work out. He goes to all of his classes and wants to join student groups.

“Addicts tend to have a lot of potential. It takes a lot of devotion to get high every day. If they can harness that, which I’m just starting to learn how to do, they can do great things,” Rabolt said. “When you lose absolutely everything, you gain this ability to do absolutely anything.”

The Student Association Senate approved more than $440,000 in general allocations to student organizations at its meeting Monday.

The next time you’re in Dupont, stop by Astoria for some tasty food, novel drinks and a spirited D.C. nightlife experience.

With winter weather fast approaching, take advantage of the last few weeks of warm weather with these revitalizing events happening in D.C. this weekend.