A grand ballroom is almost the last place one would expect to find the University’s austere security czar, a man who protected presidents before taking the helm as GW’s senior associate vice president for safety and security.

But Darrell Darnell will join other members of GW’s top echelon of administrators for an evening of waltzing and jiving in GW’s first ever Dancing With GW competition Feb. 9.

Inspired by the popular reality show “Dancing with Stars,” the competition pairs a member of the student organization GW Ballroom with an administrator to participate in a dance number, ultimately having them compete for the top honor of the dancing queen – or king – of Foggy Bottom.

Rehearsals began in mid-November with the pairs waltzing, whisking, spinning and swaying – at times twice a week – to build an extensive repertoire of moves.

As the date of the competition quickly approaches, many couples are practicing every day for two hours or more.

Securing practice space was often an issue, and team members had to be flexible with dates and times. Despite all the hard work, the participants say they are anxiously and excitedly awaiting their dancing debut. 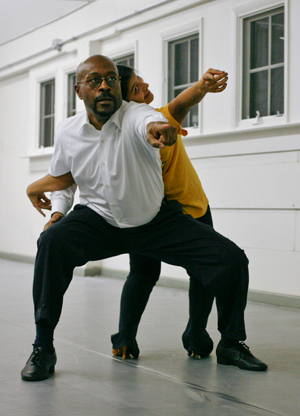 Couples are paired with a coach – a GW Ballroom alumna or local resident interested in ballroom dancing. This coach offers feedback, helps with song choice and choreographs parts of the song.

Kevin Liu, a first year law student at GW, is a mentor for two couples in the performance. While an undergraduate student at the University of California, Berkeley, he took part in competitive Latin dancing. He saw advertisements for the event and offered to help.

“It’s a big time commitment, but it’s a great break from studying law,” Liu said. “In such a short amount of time, the couples have gotten much better. I’m so proud.”

Liu watched Thursday as one of the couples shuffled across the floor of a Mar vin Center dance studio, routinely restarting the music to adjust their movements.

Several of the participants, both students and staff, have little to no dance background, but that only increases their desire to participate.

“I think it’s a great opportunity for people to see us as more than just administrators,” Grace Henry, director of the Center for Student Engagement, said. “It’s out of my comfort zone, but it’s a great experience.”

From a traditional waltz to a Bollywood-infused dance number, the event features an array of dance styles.

With just a few days left before the final competition, board members are working to finalize last minute details and boost ticket sales, but many feel the lessons they have learned on the dance floor can relate to their lives out of their newly found spotlight.

“I’ve learned that working with a team is hard,” Iannaccone said. “But once the pieces start falling into place, it’s worth it.”