GW’s top student leaders will take their fight against fees straight to the top next week.

The Student Association executive team will urge members of the Board of Trustees – the University’s highest governing body – to provide reasoning for all costs tacked onto tuition, after completing a months-long probe into campus fees.

Student Association President John Richardson and Executive Vice President Ted Costigan called upon the students in their fee-hunting commission to take a more proactive role in identifying and potentially eliminating unnecessary expenses instead of waiting for administrators to provide them. Richardson said staff in University President Steven Knapp’s office reached out to be part of the process last fall, offering to “send requests” to academic and student life departments to volunteer fee information, but as of early January, he said the office made little progress. 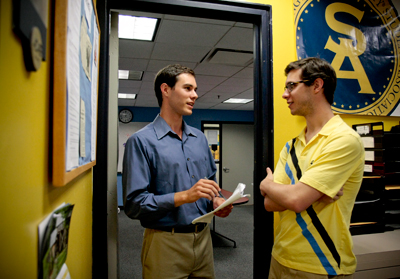 To finish the project, the dozen-member fee task force compiled a formal report independently. It was completed Jan. 28 but Richardson and Costigan said they were still reviewing the findings and declined to share specific figures.

Richardson said he plans to present the task force’s findings to the Board of Trustees’ Student Affairs committee at its Feb. 10 meeting, where the body will set tuition for next year. He will also push the Board to support listing out all costs on tuition e-bills and any additional fees by next fall to allow for “community oversight” on University charges.

“If the whole community can see how much exactly they’re being charged – services are a big part of it – then it democratizes the process of advocacy,’ ” Richardson said.

University spokeswoman Candace Smith said the board considers factors suggested by administrators when setting tuition, but declined to say what those factors were.

In the four years of Knapp’s tenure, tuition increases have been limited to 3 percent or less annually.

Members of the fee commission, which includes senators and cabinet members, sought out fees from GW Housing Programs, Student Health Services, the Office of the Registrar, Student Technology Services, the Office for Study Abroad and the University Police Department. The students encountered resistance, Costigan said, because “some departments are reluctant to give us those numbers.” Earlier this month, Costigan said he asked the University’s budget office whether certain programs – like study abroad – were designed to raise revenue through fees instead of just covering costs. As of this week, he hasn’t received a response.

Study abroad fees range from $550 to $6,150, depending on the program and its housing options. Other targeted fees range from the $35 registration fees for the off-campus programs to the $200 to $600 employers must pay for a table at the Career Fair.

Senator and chair of the SA Finance Committee John Bennett, U-At Large, called for GW officials to consider footing the bill for required University Police Department presence at student events with large crowds or alcohol. Groups must pay $160 per officer, but as Bennett pointed out, “Individual student orgs are not the ones that signed the contract with UPD. They shouldn’t have to pay it.”

In a recent victory for lowering student costs, Costigan negotiated a 22-percent reduction in printing fees for Gelman and Eckles libraries in talks with University Librarian Jack Siggins, delivering on one of his top campaign goals. Students will pay 7 cents, instead of 9 cents, per page – a cost that matches fees at the Himmelfarb Library and Tompkins Hall – when the deal is finalized this week.

Costigan said Knapp and Provost Steven Lerman supported efforts to increase fee transparency so that students could receive financial aid for additional charges, but the administrators brought up concerns about raising tuition.

Richardson acknowledged that they would not find every fee, but said they would update the list as new fees and charges arose, relying on students and staff across the University to “let us know when we miss one.”

This article appeared in the January 30, 2012 issue of the Hatchet.

GW should protect the sanctity of snow days